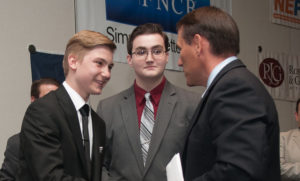 Alec Ryncavage is a 15-year-old entrepreneur who is adding new software and new ideas to the world of technology. Since its founding in May 2015, his company AR Enterprise has continued to grow, and it was the Wild Card Winner at the 2016 TecBridge Business Plan Competition. But where did AR Enterprise come from, and when did Alec decide he wanted this to be his life?

This rising sophomore from Wyoming Valley West who developed the company explains that AR Enterprise is a technology researching development company that takes normal antivirus software and delivers it via USB drive. Instead of downloading the software off the internet or buying it on a CD drive to get rid of a computer virus, you insert a ‘normal flash drive’ that will not only clean your computer of viruses but also will improve the machine’s function at the same time.

The reason for the USB drive is the software itself. AR Enterprise is even using technology that the antivirus market hasn’t used yet, which gives the new company a competitive edge. Another advantage is that the product has been brought down to a consumer market price without being compromised.

“So for $24.99,” Alec said, “you’re getting premium grade anti-virus software on a personal computer, which hasn’t been seen in the market before.”

The best part about the USB, though, is the security it provides for the modern world, Alec explained. As technology continues to become cloud-based and virtualized, it is AR Enterprise’s goal to continue the feeling of security that comes from a physical piece of technology.

“You’re technically only one Google search away from a virus,” he explained.

Alec said that at first he didn’t know he was interested in starting a business, only that he had an idea for a product. The impetus came while Alec was consulting in freelance web design, when he just decided to run with the idea of a company.

AR Enterprise then took off after Alec’s involvement with the 2016 TecBridge Business Plan Competition. AR Enterprise won the Wild Card spot with its cash prize of $5000. Alec said that winning the competition as well as receiving feedback and insight has certainly been the most pivotal event so far in his career.

As for what’s next for AR Enterprise, the goal is to hit the consumer marketplace. The USB drive was targeted to launch last November, but Alec is hopeful it will be available soon. He hopes it lands in WalMart, Target, Best Buy and Amazon.

The ultimate goal for the company is to expand and add value wherever it can. The company will continue its researching development with science technology and engineering, among other areas.

Alec hadn’t before imagined himself a real entrepreneur at this age. But for Alec, the work is now real, and it proves to be a never-ending schedule. He knows how important it now will be to balance school and work, but he welcomes the challenge.