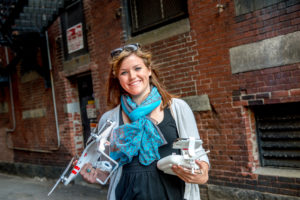 Since its win in the TecBridge Business Plan Competition in 2014, start-up company DARTdrones has turned into an industry-leading national drone training school. So how did it get started and become what it is today?

The idea began in the School of Business and Global Innovation at Marywood University in 2013. While trying to increase enrollment in Marywood’s Aviation Program, Professor Chris Speicher, PhD, speculated that drones would be the next big thing. At Chris’s direction, during that fall semester, some of Chris’ MBA students tackled the idea of exploring ideas in the dronesphere.

Simultaneously, Chris’ daughter Abby Speicher was in her first year of her MBA Program at Babson College. As TecBridge announced the Business Plan Competition for the spring, Chris partnered Abby with his students, particularly one student with a strong military background. Together, the idea began to be fleshed out for the TecBridge Business Plan Competition in 2014.

In what has now become an (in)famous BPC story, Abby brought her first drone that she only recently had purchased and hardly knew to navigate with her to the company pitch day. As she attempted to show the panel of judges how it operated, she lost control; while thankfully no one was hurt, the necessity of the business was shown. Training was a must to operate drones.

And so it began. The DARTdrones LLC submission for the 2014 BPC would go on to win. Using their newly-gained insight from the process and the first place prize money, DARTdrones continued to develop through the following Christmas. Curriculae were developed, partnerships were created, and the company launched. Abby would also move into the position of CEO.

By the summer of 2015, DARTdrones had hired five employees, and the business began to train more instructors to meet increasing demand. That number has grown to be 36 flight captains nationwide and 9 full-time employees including 3 full-time hires in Scranton the headquarters within the last five months. DARTdrones will continue hiring more in Scranton as demand grows nationally with more individuals and companies seeking out experts in operating drones.

While the business continues to flourish, it was not without its own challenges. Like many start-ups, forming the core team of people to build out the DARTdrones vision posed a lengthy and difficult process. A combination of four-month interns, friends, family and classmates helped establish the grassroots before income allowed for full-time workers. Today, the challenge to train more instructors to meet demand is one Abby welcomes.

What’s next for DARTdrones? It just partnered with Acend, a leading telematics, software and data science provider to gauge drone operators in helping to establish the kind of insurance each particular drone operator needs based on usage. Full details of the partnership can be found here. Additional government regulations for drone flight will also lead to a continued surge of demand for training.