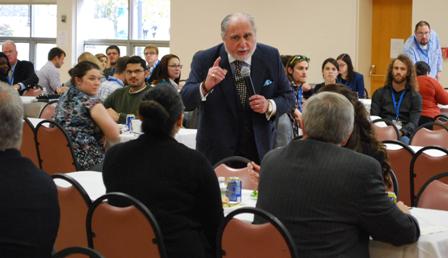 I didn’t know what to expect when I arrived at Marywood University for the Entrepreneurship Institute Conference. I hadn’t been to an event like this since I was in high school and regularly attending FBLA events, so I went into it making zero assumptions. That’s not to say I didn’t have goals, though. I wanted to meet new people, learn from those around me and commit to memory how to spell “entrepreneur”.

As someone who came from outside the business world, I was excited to see the enthusiasm and care that other people shared for their pursuits. It wasn’t just politeness; there was genuine enthusiasm when one person got an update about someone else’s endeavors. Everyone wanted success for their peers, especially during the Rocket presentations.

The workshops were all interesting and relevant as well, particularly for someone who came from a journalism background. Some provided important information from a business standpoint (7 Social Media Tips to Boost you & Your Biz), while others were more of a personal motivator (Defeating the Enemy Called Average). It was a nice way to get some professional advice and personal encouragement at the same time.

In all, every speaker was thought provoking and interesting, but the best moment was the keynote address by Steve Schiffman, an author of more than 70 books on sales. Again, as someone not from the world of sales, I wasn’t sure how much I would take from his talk, but I took notes anyway. And I’m glad I did, because I took away a lot of important things to consider.

The primary focus of his speech was on how to succeed in business (not the Broadway musical), and how simple it can be at times. He outlined the reasons some people did not find success, be it fear, uncertainty, or bad habits, while also talking about some of the keys to overcoming adversity.

But what resonated with me the most was a fable that he shared about two lumberjacks. One woodsman worked all day chopping firewood, while the other took breaks. By the end of the day, the latter had cut more logs than the former. When asked why, the more successful lumberjack revealed that while he was taking breaks, he was taking time to “sharpen his axe”.

As someone who’s been trying to find the right job opportunity, this story resonated with me. There are times when you want to give up and quit. In that situation, instead of plowing through and not changing anything, take a step back to separate yourself from the situation, get refreshed mentally and physically, and ask yourself what you could be doing differently.

In the end, it was a thought-provoking day, and energized me to reprioritize my goals and to take a hard look at where I want to be. I’m not sure where my career will take me, but I would love being involved with a supporting, encouraging group such as the EIC.